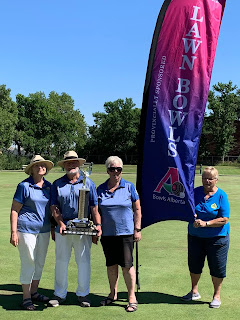 Teams played 5 round robin games against one another over the course of two days and it culminated w
ith teams being seeded into the A, B, or C finals.

Richard Turner, Thelma Melnichuk, and Katherine Kerr from Highlands (3-1-1) went up against Barb Moll, Curt Moll, and Eric Moll from Medicine Hat (3-2). The Turner rink came out on top with a 9-5 win to take the Medicine Hat Memorial Trophy.

Wes Bresee, Mike Gilchrist, and Jean Bresee (3-3) from Medicine Hat went up against Bill Black, Ann Black, and Sandra Angell from Highlands (2-2-1). The games was tied at four going into the eighth. The Bresee rink managed to score a point to take the 'B' Championships 5-4.

Scott Packer, Esther Rodzinyak, and Robert Rodzinyak of Lethbridge (2-3) went up against Linda Bower, Frank Buck, and Joyce-Ann Bacon of Medicine Hat (1-4) and soundly defeated the Bower rink 20-1 in seven ends to take the 'C' Chammpionship.