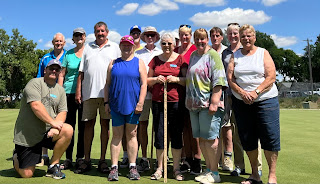 The Yardstick Tournament is one of the club's favourite tournaments. It is a jitney style tournament - new teams are drawn after each game - and scoring is high. Regular bowls is played, however all of the bowls within a yard of the jack score points for each team.

Autographed meter sticks are awarded to the top three men and top three women. Each player has their team's points in all three games added up to determine the top three.

This year there was a tie for top spot with Pat Dennis and Linda Bower earning the same number of points. Jean Bresee was second, with Barb Moll finishing up in third.

On the men's side, Mike Gilchrist finished first, with Frank Buck taking second, and Wes Bresee in third place.