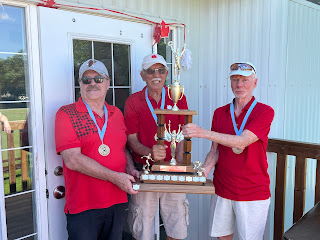 The club resurrected the Canada Day Tournament. Participants were decked out in red and ready to play triples.

This year's format involved skips being pre-chosen and then drawing their team out of a hat. Each team would play three games. The top two teams would then play for the Burniston Family Trophy; third and fourth would play for bronze; and fifth and sixth would play for fifth place.

Wes Bresee's team of Jim Clegg and Doug Sanregret came out on top in the round robin and in the final with a 11-5 win over Barb Moll's team of Pat Dennis and Yvonne Sanregret.Curt Moll's team of Frank Buck and Sam Ferrier took the bronze with a win over Linda Bower's team of Gerry Aitken, Roz Fisher, and Pat Ferrier. 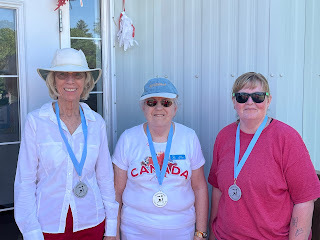 The fifth and sixth place teams decided not to play their final game. 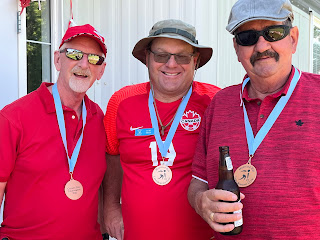