The Third Annual Yardstick Tournament was held on the weekend with 13 participants vying for a chance to win one of the coveted meter sticks.

A yardstick tournament is a bit different from a regular games of bowls. All the usual rules apply except for the following:

Drawing to or drawing close to the jack becomes vital. 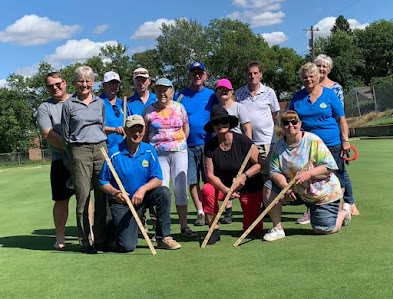 This year we ran the yardstick like a jitney - players re-drew for pairs teams after each game. We played three games. Players' points earned by their teams go towards the point total.
On the women's side, Barb Moll was the high lady with 68 points. Jean Bresee and Roz Fisher tied for second at 66 points so they had to play a tiebreaker end. Roz came out on top in the tiebreaker and was awarded second place, while Jean had to settle for third.
The men's side saw Allen Hunt score 69 points - 10 more than the second place finishers - and there were three men who tied for second. This also required a tiebreaker end. Curt Moll, Wes Bresee, and Frank Buck played the tiebreaker and Curt came out on top, with Wes earning the second closest bowl. Curt would finish in second place, while Wes took third, and Frank finishing just outside of the prizes.
at August 30, 2021