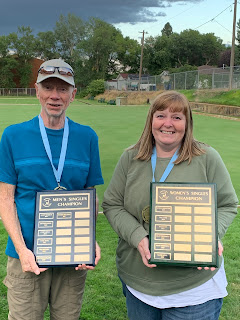 The 2021 singles league came to a close tonight with the men's gold/silver match, and the bronze medal match.

The finals saw a re-match between Wes and Stephen with Wes coming out on top this year with a resounding 14-5 win. In the bronze medal match, Curt took the match 13-6 over Mike.

Barb was declared the ladies champion for the second year in a row.