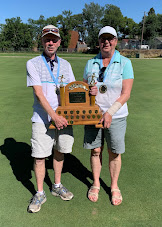 On the championship side, Wes and Jean Bresee (#1 seed) took on Barb and Curt Moll (#2 seed) Sunday afternoon. This game would be a rematch of last years final. It wasn't meant to be for the Moll's as the Bresee's eked out a 7-6 win to win their second consecutive H.J. Cove Memorial Trophy.

Thank you to all the teams this year for your participation!