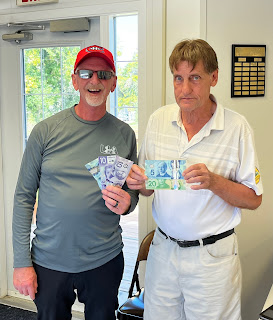 The tournament season has come to an end at the club with our 'Big Money' tournament. This year we had four pairs teams, with two floaters. The floaters would bowl with the team that lost the matt and was losing in the game. It made for some interesting games.

Mike Gilchrist and Frank Buck took home the 'big money,' while Joyce-Ann Bacon and Linda Bower finished second, and Jean Bresee and Pat Ferrier took third. Curt Moll and Sam Ferrier finished in fourth and out of the 'big money.'

Special thanks to Beth Davies and Barb Moll who were the floaters. Both volunteered to float and knew they would not be winning any 'big money' in their role.

All that remains this season are jitney evenings on Wednesdays. Remember the start time is now 6:00.